This case has been heard by the Zoning Commission, and will subsequently be heard by the Board of Zoning Adjustment (BZA).

Some particularly interesting artifacts include:

Both properties are being prepared for redevelopment. The church is no longer interested in occupying the building, and any kind of use would require substantial rehabilitation. The church has contracted with Feldman Ruel to have each property entitled for redevelopment and then sold. The proceeds will benefit the church, which will put it towards their continuing operations.

The church building itself, 3200 22nd St. NE, is planned to be residential only and has already received BZA approval as a separate case.

The gravel lot is planned to be mixed-use, with retail/restaurant spaces on the ground floor and residences on top. There will also be underground parking.

2026 Jackson rendering, from the southeast

The tentative plans would include retail frontage buffered from the nearby detached houses on Jackson, along the corner abutting Rhode Island Ave. NE. It would include a possible sidewalk cafe within the footprint of the building (not in public space) along that corner. Parking garage access would be on 22nd St. NE, inbetween the retail and the planned homes in 3200 22nd. 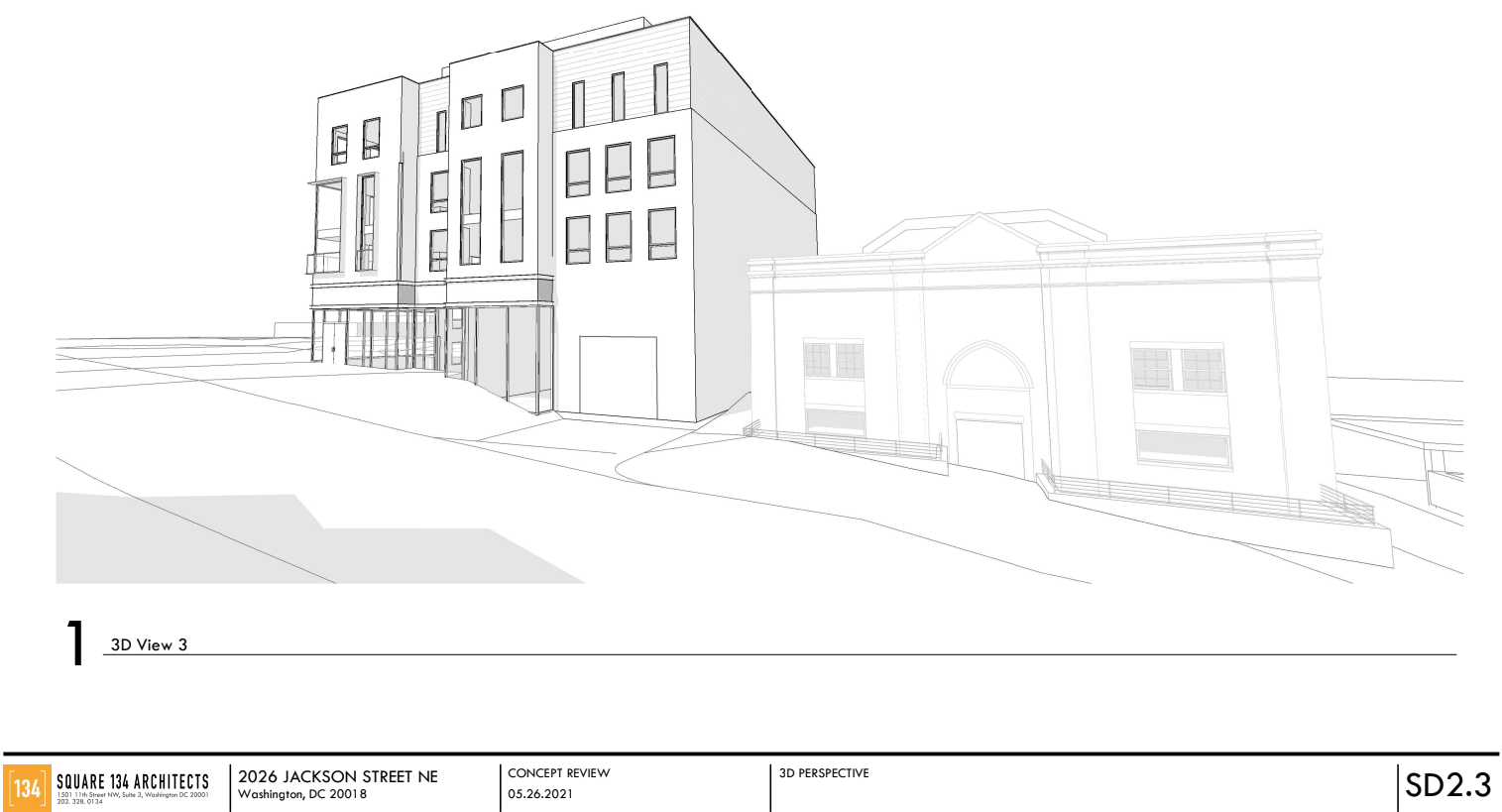 2026 Jackson rendering, from the northeast

There would be approximately 35-40 homes, 2,000-3,000 square feet of retail, and 5-6 parking spaces. This makes it comparable to (but smaller than) 2027 Rhode Island Ave. NE (located on the other side of Rhode Island Ave. and just a little bit southwest). See the table for comparison.

The ZC case concerns changing the Zoning Map, which broadly determines what can be built where. If approved, the parcel would change from R-1-B (“predominantly developed with detached houses on moderately sized lots”), to MU-4 (“moderate-density mixed-use development”).

In this case, there is ample context to consider the switch, as the parcel would move from matching the zone of the parcels directly north and west of it, to matching the parcels along Rhode Island Ave. NE to the northeast and southwest. 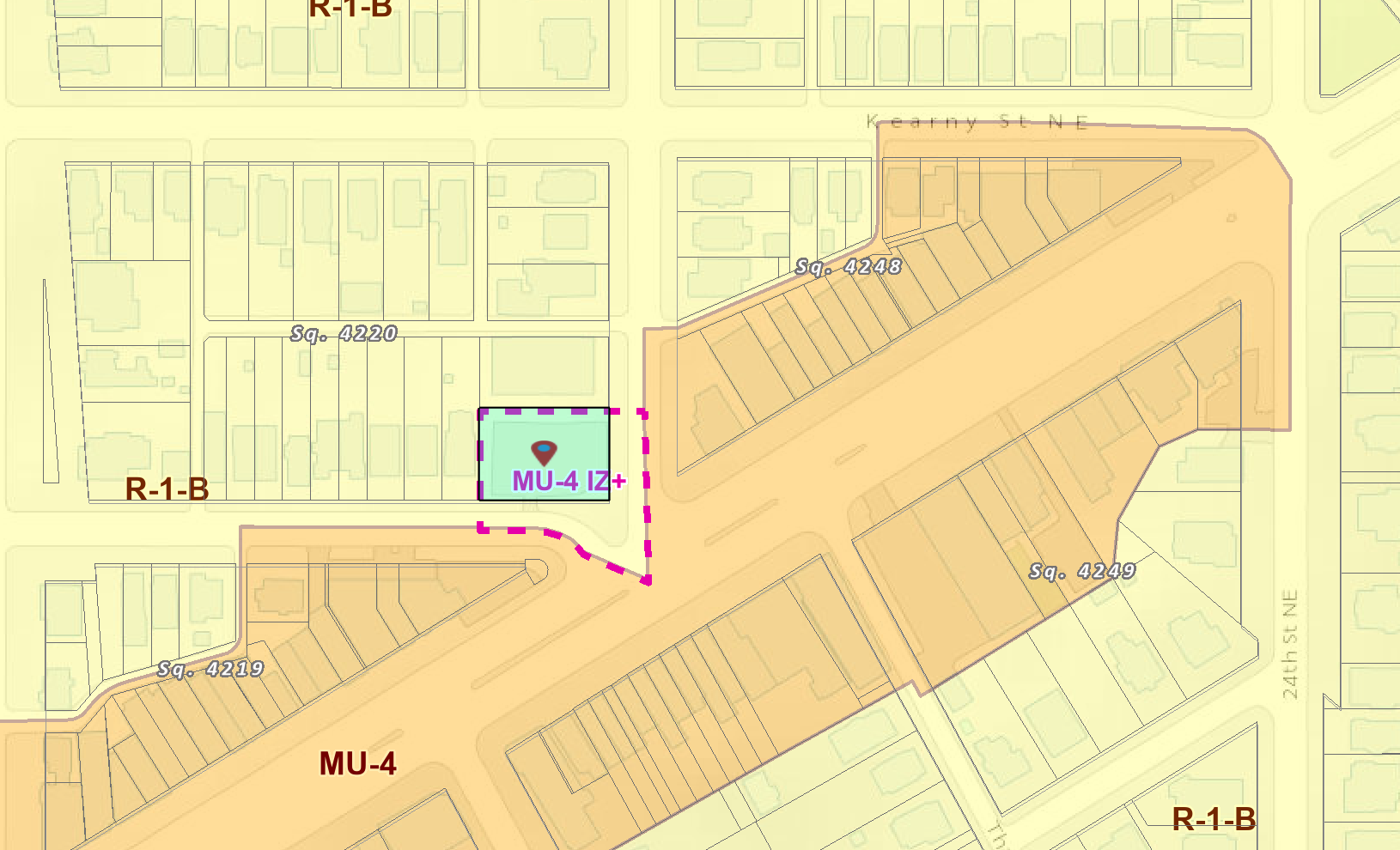 Considerations for whether ZC should make this change include harmony with the Comprehensive Plan (and Future Land Use Map), community context, and infrastructure demands.

The map amendment would carry an IZ+ stipulation, which would raise the minimum affordable housing requirement slightly (the current estimate based on preliminary designs is there would be 6-8 income-restricted units).

Additional zoning relief might include specifics of the setbacks, courtyard size, or specific number of parking spaces, as examples. The considerations would be less drastic in nature, and be made with more specific building plans proposed.

During the ZC hearing, the issues of parking, trash collection, and aesthetics were both mentioned as issues to be discussed during the BZA hearing, which Chair Hood referred to as “another bite at the apple.” There was some concern mentioned that the applicant could pursue a by-right development after receiving the map amendment; the applicants insisted this would be very difficult given the shape, size, and cost of the plot.

The opportunity to weigh in on the ZC case has passed; this section will be updated for the BZA case when that information is available.

Anyone can submit comments in support or opposition into the case record, to be considered by the ZC when judging the application. I’m happy to help regardless of your position, so feel free to reach out if you aren’t sure what to write (or take a look at some letters of support and opposition in the case record). You may also choose to speak at the hearing, but you will have to submit written comments either way.

To submit a letter:

To whom it may concern:

This letter of (support/opposition) is in regard to Zoning Commission case 21-14, a map amendment to convert the property at 2026 Jackson St. NE to being zoned MU-4.

I (do not) believe allowing mixed-use development here is appropriate, because (reasons).

Very respectfully,
(your name)
(your address)

There was a writeup about this project on The Hyattsville Wire, where it was covered together with the adjacent project at 3200 22nd.

You May Also Enjoy

reports, a quadplex, and a rec center update

an increase in facilities on the Model Cities lot