The meeting was held virtually (via WebEx) at 6pm ET on Wednesday 11/16/2022. It was over around 8pm. Video and transcript are available here.

This is a regularly scheduled monthly meeting. Full-commission meetings are:

This meeting was chaired by Vice Chair, Commissioner Thomas, with support from Commissioner Montague, due to Commissioner/Chair Manning not being present. Though she tried to join later, this didn’t occur due to technical difficulties. All other Commissioners were present for the call.

As conveyed by Commissioner Montague in an 11/14/2022 email with annotations/corrections/updates based on what happens:

Inspector Altieri from MPD presented some information and took some questions related to crime. He emphasized that while crime is low in our area, “people aren’t stats” and low crime is irrelevant if someone is a victim or fears being a victim. He discussed plans for Walk and Talk events in each ANC area.

He mentioned a couple things to watch out for:

The was some discussion on a nuisance property at 2400 20th St. NE, with some plans for follow-up with the property owner if squatting is the issue.

Kelley Cislo from CM McDuffie’s office gave quick comments and took some questions, including about a new program to training software testers at the Learnix Tree Center funded by DC government grants.

ABRA licenses allow a business to sell or serve alcohol; they may be issued to stores, restaurants, taverns, bars, or nightclubs, among other business types, and include allowable time periods for various types of sales and activities. You can learn more about the many license types/classes on the ABRA website.

ABRA renewals can be protested by any of a number of parties with standing. If someone decides to protest, the issue can frequently be resolved by negotiating a Settlement Agreement (SA), which adds additional ABRA-enforced provisions to the license. A party with standing must formally notify ABRA that they are protesting before the protest deadline. In the case of an ANC, protesting requires a formal resolution of the ANC.

cases up for renewal

The licenses originally on the agenda, in order of protest deadline, are:

As 5C currently operates, outreach at the SMD level should be done through a meeting before bringing a matter of the full Commission. Only the two cases in 5C07 had received an SMD meeting. All other cases on the agenda were skipped due to lack of an SMD meeting having occurred (or possibly just due to Commissioner Manning’s absence in the 5C04 cases).

One case, that of The Public Option, had already passed its protest deadline by the time of this meeting, though Commissioner Thomas (whose current SMD boundaries cover the establishment) did not appear to know this when he deferred on the topic.

As the protest deadlines for all other cases will pass before the next regular meeting of 5C, it seems unlikely SMD Commissioners or the ANC will be acting on the other renewals in time, though it is possible this occurs in a special 5C meeting (such as 11/21’s).

The Commission passed unanimous approvals for the two 5C07 cases. As licenses are generally approved in the absence of protest, this was not strictly necessary, but allows the business more certainty as their application period progresses.

DDOT plans to upgrade to LED lighting DC-wide. There is a lot of background on the DDOT project page.

A briefing was given by Ashley Wells and Alese Ballard of Plenary Infrastructure DC, the company contracted to perform this work. A few critical points mentioned in the presentation as well as through question/answer:

This is a long-planned development with a very lengthy and complicated history. The Zoning approvals for this project had been tangled in court proceedings for some time, but those cases were finally(?) resolved in mid-2021. 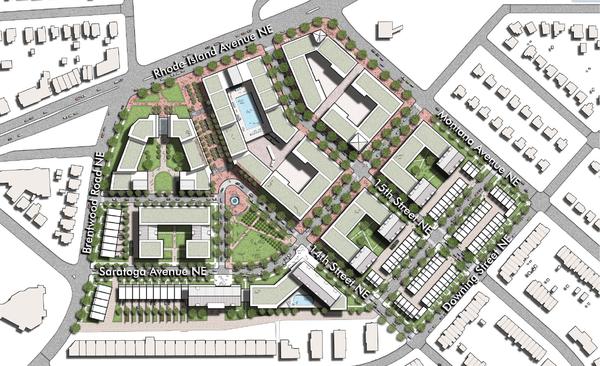 On the meeting, Commissioner Thomas (while experiencing technical difficulties that made a lot of what he said unclear) emphasized a commitment to fair standards for folks who live in Brookland Manor and who have been promised relocation within the development as new buildings come online. Relocation within the development has always been a part of the RIA DC plan, a point that was emphasized in statements and questions/answers by Commissioners Thomas and Oliver, MidCity’s Andrew Lee (Directory of Community Engagement), as well as Commissioner-elect Anthony Dale.

On the 11/14 planning meeting, Commissioner Thomas mentioned seeking an update on 17th St. speedhumps from DDOT at the planning meeting, and said he intended to invite Dalando Baker (DDOT’s Community Engagement Specialist for Ward 5) to the 11/21 meeting. It’s unclear whether this invitation was extended, though Mr. Baker did not attend the meeting.

An assessment for traffic safety mitigations (such as speedhumps) is called a Traffic Safety Investigation (TSI), and DDOT maintains a dashboard for TSI requests. A TSI request may be submitted with or without a particular mitigation requested, though there is debate about which is more effective. If without, they are simply a request that DDOT look into driver behavior in a certain place and evaluate for any mitigation.

TSIs on the dashboard currently for 17th St NE:

In the 11/21 meeting, Commissioner Thomas specifically mentioned the last SR above as being his request for speedhumps, and noted the aggressive speed with which drivers operate their cars on 17th St. NE when coming off Montana Ave. NE. Commissioner Oliver also discussed various concerns about driver behavior, and mitigations she would like to see. A question was asked about the correct term for flexposts (Commissioners landed on “bollards,” though there are many inflexible variations of bollard as well), and Commissioner Oliver mentioned wanting to see many more flexposts installed.

5C has had a lot of trouble preparing, approving, or posting Meeting Minutes. There have not been any meeting minutes published on the website since October 2021.

In the meeting, 5C’s Secretary, Commissioner Gail Brevard, refused to read the minutes aloud. They were ultimately approved by a mixed vote. Commissioner Brevard made representations on the chat that the meeting minutes were posted on the website, but did not answer follow-up questions on where.

These must be done every quarter and outline the expenses incurred, money received, and balances for the Commission. These reports are available online for all Commissions. The specific report on the agenda was for Fiscal Year 2022, Quarter 4 (July-September 2022).

ANC 5C has been sitting on substantial savings (approximately $87k at last report), but Commissioner Oliver, the Treasurer, has been having some trouble submitting the reports. At the last full-commission meeting, the Commission voted to approve the previous report pending corrections that were to be made after the meeting (or they would risk missing another dispersal of funds from the DC Government); it’s unclear whether this submission occurred.

In the meeting, this trend continued, with the treasury report ultimately not being approved due to discrepencies and incomplete reporting. A special meeting was scheduled for 11/21 to complete this business. As this business was not possible through a virtual meeting due a lapse in authorization for virtual ANC meetings, it has been further rescheduled to 11/30.

Constituents on the 11/21 call, both verbally and in the chat, expressed frustration on the lack of secretary’s and treasury reports being completed.

You May Also Enjoy

reports, a quadplex, and a rec center update

an increase in facilities on the Model Cities lot

water and a rec center update